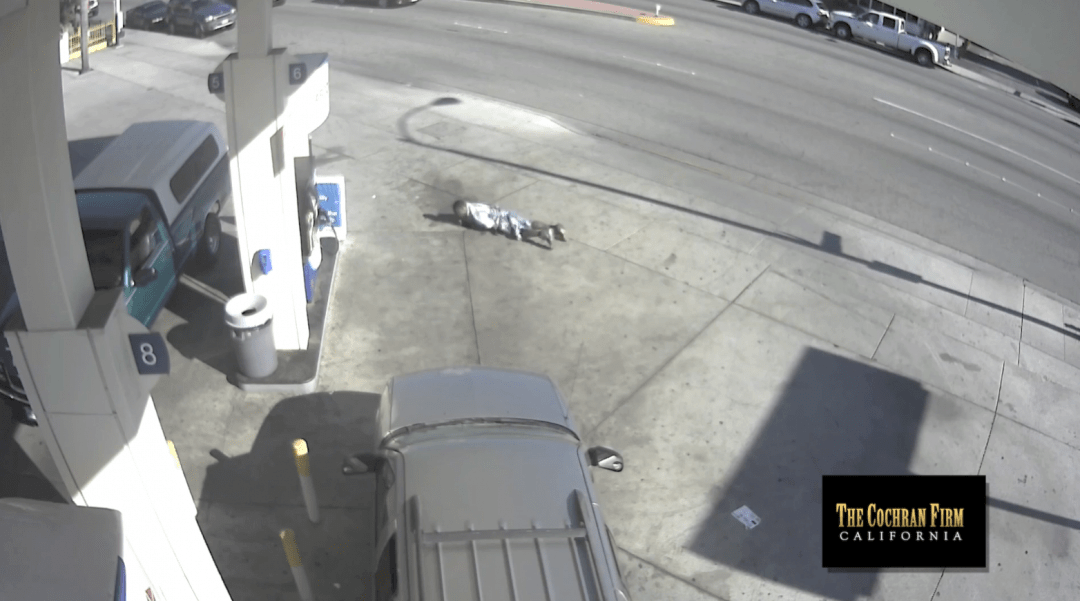 Video shows Nicholas Robertson did not point gun at deputies

Los Angeles, CA – The Cochran Firm has announced that on Monday a unanimous jury awarded the children of a man fatally shot by Los Angeles County sheriff’s deputies  a total verdict of $3.6 million dollars in a wrongful death lawsuit.

28-year-old Nicholas Robertson died after being shot 17 times by deputies assigned to the Lynwood Sheriff’s Station on Dec. 12, 2015in front of an Arco gas station near the intersection of Long Beach Boulevard and Magnolia Avenue. Los Angeles County sheriff’s officials claimed that Robertson pointed a gun towards deputies and that they feared for their lives, but multiple videos showed that Robertson was walking in the opposite direction of the deputies when they began shooting him. In all 33 shots were fired by deputies, 17 of them striking Robertson. The firearm Robertson was holding at the time was not loaded.

“When we talk about the force that was used in this case, the evidence showed–in fact it was a pathologist hired by the defense–that said that Nicholas Robertson suffered 17 gunshot wounds but only two of them were fatal,” explained attorney Brian T. Dunn with The Cochran Firm. “The pathologists opinion was that the last two shots were the fatal shots. So what that means is over a 24-second period in which Mr. Robertson is being shot–those are all non-fatal gunshots–so he could have lived if they had just not kept shooting him again and again and again and again.  He could have lived because he suffered 15 non-life-threatening gunshot wounds and only two fatal and they were at the very end.  We looked at the sheriff’s training.  They are trained to shoot in two or three round bursts and then reassess.  They did not do that here.  Even an adherence to their own training in this situation could have resulted in the saving of a life.”

Dunn and the Cochran Firm filed the wrongful death lawsuit against the County of Los Angeles and the deputies involved on behalf of Robertson’s young twins and daughter.

Dunn continued, “We think that justice was served in this case.  We think that the jury showed a lot of courage.  This is a case that involved not just the deputy’s use of force–that resulted in the death of Nicholas Robertson–but also the tactics they used when they approached the incident. The significance of this verdict is that by finding that the deputies acted negligently, the jury sent a message that there are some things that could have been done differently.  Perhaps this will result in a change in the way that Los Angeles County trains its deputies.  Perhaps it can result in a change in the way that they approach individuals such as Nicholas Robertson–who although he was under the influence of a narcotic–was not someone who had harmed anyone.  So what we’re hoping is that this verdict will result in no other family having to go through what the Robertson family went through.”

About The Cochran Firm California

The Cochran Firm California was founded over 40 years ago by the late Johnnie L. Cochran, Jr., one of the country’s most well-known and well-respected legal advocates.

Comprised of a select group of lawyers chosen by Mr. Cochran himself to carry out his legacy, The Cochran Firm provides high-quality, effective representation for ordinary citizens throughout the country. Led by well-known attorney Brian T. Dunn, The Cochran Firm attorneys pride themselves in standing up for the rights of people and families who have been wronged by the conduct of others, be it a personal injury or wrongful death matter, or a case arising out of police abuse or government misconduct.

Brian is a native of Los Angeles, CA and graduated from UC Berkley in 1990. He pursued his legal degree at the University of Michigan, graduating law school in 1993.

In 1992, while a student in Michigan, Brian was hand picked by Johnnie Cochran to serve as his law clerk for Civil Rights litigation. Brian was personally trained and mentored by Mr. Cochran, and was hired in 1995 as a staff attorney on Mr. Cochran’s Civil Rights Litigation team.

Having spent his entire career with The Cochran Firm, he has handled many of the Firm’s highest profile police misconduct cases, including those involving Geronimo Pratt, Reginald Denny, Devin Brown, Tyisha Miller.

Brian has received numerous trail attorney honors and is a frequent lecturer on the logistics and complexities of the practice of civil rights litigation, both to attorneys and police officers and in the media.